Andy (Saxophone, Keyboards, Vocals)
Andy is our music director. He has been playing professionally since the age of 16. Working with this group is a dream come true, and the talent and people in this group make it truly special. When we play together, this energy is transferred to our audience. "Each time we play together is a blast! Does not matter if it is practice or a gig. Just a joy to play with these people!
"Music is a gift that one gets to share with others. Nothing could be better!" 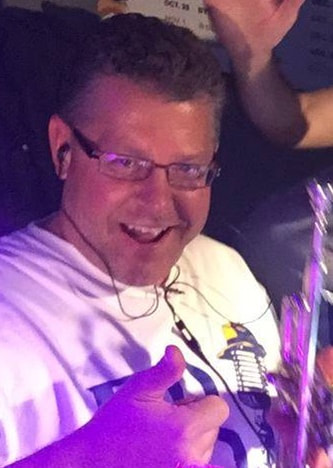 There once was a young man named Mike
Who was a really noisy young tyke!
He was given a horn --
A musician was born!!
Now he makes noises people like!!!

Gordon (Guitar)
Music is not a typical hobby for a dairy farmer, but I credit my parents for (literally) dragging me off the combine for piano lessons when I was very young. In college I realized you cannot pack a piano around and picked up guitar. For most of my life I have played for personal enjoyment and in church worship bands. Then along came the FBI and the Untouchable Horns. This has been a great opportunity to work on a project with direction and focus, and it has challenged me musically. F.B.I. is an awesome project of great musicians that act like family, while bringing enjoyment to all who come to hear us. 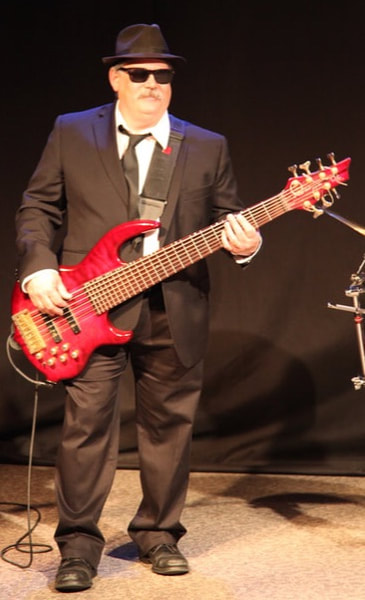 Rich (Bass)
I come from a musical family, so I'm not a stranger to the strings! I was born in Boulder, Colorado, and began playing musical instruments early on. I started on the drums, took some piano along the way, and then moved to guitar, which became my main instrument for a time. After an ill-fated attempt at the bag pipes, I settled in on the bass guitar, which feels like ...... "home bass" to be sure.
​
I have played in many different types of bands and genres over the years, from blues/rock/jazz/country/gospel/50's covers/originals and christian rock. I am very excited to now be part of the F.B.I. and the Untouchable Horns, covering songs from some of the most influential artists of our times and some of the most amazing musicians I'm honored to perform with. Be sure to stop by and say hi at a gig, and I'll give you the "low down" on the rhythm section.

Craig (Drums)
Craig's first experience playing in a band started in 1983 when he joined the 50's and 60's group The Outta Style Show Band. Being part of that band at such a young age helped him gain confidence, experience, and a fondness for music. Through the years, Craig has been playing drums at church within a worship team. This is where he met a few current members of F.B.I. & The Untouchable Horns. Craig not only enjoys performing with such talented musicians, but also extremely loves the camaraderie within the band.
​
Craig lives with his wife Susan in Appleton. Their daughter, Savanna, lives in Oshkosh. 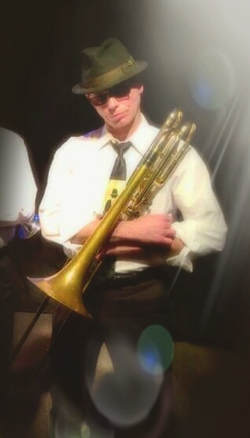 Brian (Trombones)
Covering the low notes in our horn section is Brian "Bones" Griebenow, so nicknamed because he flip flops between his regular trombone and "Frankenbone", his vintage bass trombone. Brian grew up nearby in New London, where his father taught music for 25 years. Over the years he's enjoyed performing with area concert, symphonic, jazz, and church praise bands. As the trombonist with F.B.I. & The Untouchable Horns, he gets to lay down the funky horn riffs he loved grooving to back in the day! When Brian's not playing those trombones, he enjoys hobby farming with his lovely wife of nearly 40 years. And when time allows, he's either writing for an automotive magazine or shifting gears in his vintage cars.

Bob (Trumpet)
Bob was in the U.S. Air Force Band in Washington, D.C., as part of their Ceremonial Brass unit from 1981 to 2001.  During his years there, he also performed with local salsa bands (and he still loves salsa, cumbia, and merengue music) and various ensembles, such as a brass choir, jazz big bands, and the Virginia Grand Military Band (concert band made up of current and former military band members).  After he moved up here, he put the trumpet away for about 7 years to focus on his job and family.

Bob has performed with the Appleton City Band, Fox Valley Concert Band, Oshkosh Symphony, Fox River Brass Quintet (but that one never really took off), and Big Band Reunion Jazz Band, and he used to be a member of Swing Time Big Band.  In addition to "F.B.I.", he currently performs with the Wisconsin Symphonic Winds and a couple of churches for various services, and he's been playing in Swing'n Angels (big band arrangements of hymns, etc.) for a couple of years now.

Ben (Vocals)
Ben is ecstatic to be a new member of FBI & the Untouchable Horns. Ben has been no stranger to music. From Appleton to Green Bay he has been a part of a variety of music ventures. Ben is a destination sales manager for the Greater Green Bay Convention and Visitors Bureau, so if you want information on the area he's the guy! Ben lastly would like to thank his lovely wife for allowing him to get his music fix!
​
Powered by